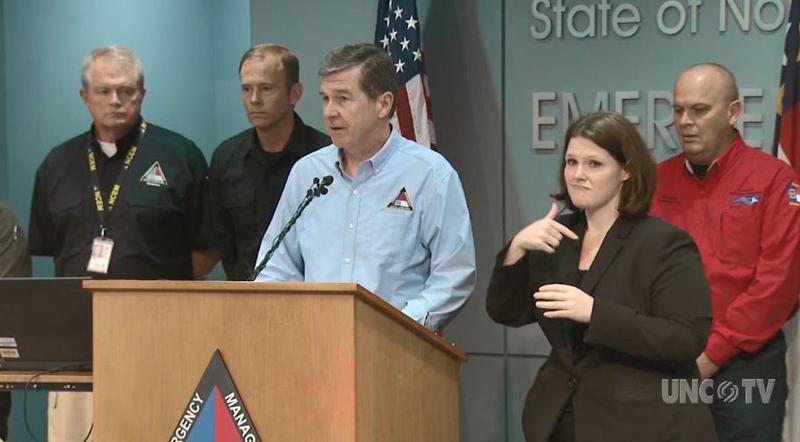 “We know North Carolina families and friends of these victims are suffering, and we extend our deepest sympathies to them,” Cooper said in a Tuesday afternoon press conference.

Cooper warned people not to let their guard down, even though the worst of the severe weather seems to be over.

“Even though there is no substantial rain now in the forecast and the sun may be shining, rivers continue to rise and we will see more flooding,” Cooper said.

Sixteen rivers are at major flood stage as of Tuesday, and three more are projected to crest Wednesday and Thursday.

There are more than 1,100 road closures around the state, including portions of Interstates 95 and 40. Officials said more closures are expected as rivers and creeks rise throughout the week.

There are 314,739 statewide power outages, according to DPS as of 2 p.m. Tuesday. Duke Energy said there are 209,478 customers without power across North Carolina, 3,684 of them in Mecklenburg County.

First responders have reported rescuing and evacuating more than 2,200 people and 578 animals. Cooper said farmers have seen flood and wind damage to their crops.

“A quarter to a half of the tobacco crop was still in the field and damaged,” he said. “Cotton, peanuts and other crops that harvest suffered damage as well.”

As evacuees continue to seek refuge in shelters across the state, Cooper warned people in Pender, New Hanover and Brunswick counties not to return home.

“To the approximately 10,000 people staying in our shelters, and the countless more who were staying with friends and families or in hotels, I know it was hard to leave home,” Cooper said, “And it’s even harder to wait and wonder whether you even have a home to go back to.”

“But please,” he continued, “For your safety and the effectiveness of our emergency operations, do not try to return home yet.”

There are four “mass feeding kitchens” now set up in Washington, New Bern, Lumberton, and Kinston, and the state anticipates having four more operating in the near future.

FEMA announced Tuesday that there is assistance available to homeowners and renters in North Carolina whose homes are “damaged, unsafe, or inaccessible because of Hurricane Florence.” Resources can be found here.