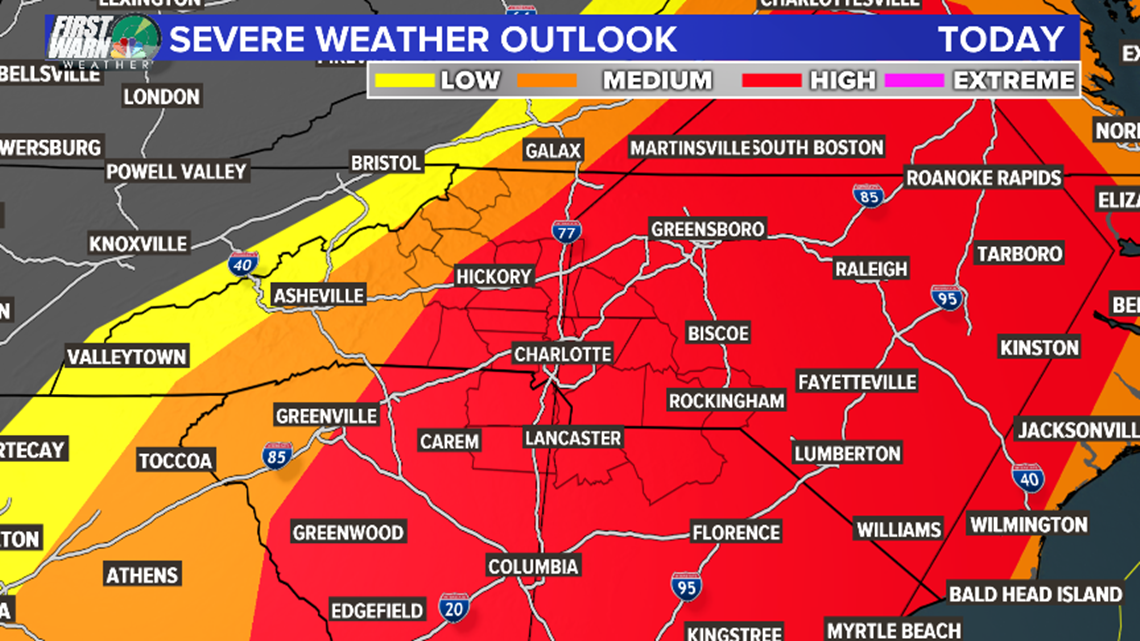 Threats from the storm will include damaging winds, flash flooding, cloud-to-ground lightning, hail and spin-up tornadoes. First Warn chief meteorologist Brad Panovich believes the biggest threat for Charlotte will be damaging winds but says you can’t rule out any possibility with Friday’s storms.

First Warn meteorologist Chris Mulcahy said the hail threat with this system has decreased slightly due to the storm’s fast speed. They’re currently tracking east at about 45 mph.

The biggest threat for severe weather will be between 1 p.m. – 6 p.m.

11 a.m.: The storm system stretches from Bristol, Tennessee into Georgia with heavy rain and flooding. Multiple tornado watches and warnings were issued in Georgia Friday morning. The mountains will have already seen showers and thunderstorms from this system.

12 p.m.: Heavy rain will be in the areas of Boone, Jefferson and Blowing Rock with showers reaching into Burke County, Cleveland County and the upstate of South Carolina.

1 p.m.: Storms will dump heavy rain on the upstate of South Carolina and showers will move closer to the Charlotte metro area. Areas just west of U.S. 321 will be impacted by thunderstorms at this time.

2 p.m.: From Hickory to Shelby and all along U.S. 321 and Highway 16 will be in the heart of the heaviest rain at this time. Showers and storms will reach Charlotte around this time. Strong winds and flash flooding will be a risk for all areas from this time until around 6 p.m.

3 p.m.: Areas along I-77 from Statesville to Chester County will see rain and storms at this time. First Warn forecaster Larry Sprinkle said some rain rates could exceed 2 inches per hour at times. That doesn’t mean you’ll get that much rain, that’s just how fast it’s falling.

4 p.m.: Heavy rain continues to fall along I-77 and areas just north and east of Charlotte, including Concord, Salisbury, Statesville and Mint Hill. Sprinkle and Mulcahy see a potential for what’s called a bow echo storm with a significant risk for damaging winds across the area at this time.

6 p.m.: The heaviest storms will be over Greensboro and areas east of Charlotte stretching from High Point south to Cheraw, South Carolina and the sand hills of North Carolina. The Charlotte area will see lingering showers but the severe weather will be out of Charlotte by this time.

How to report a power outage

How to prepare a severe weather supply kit