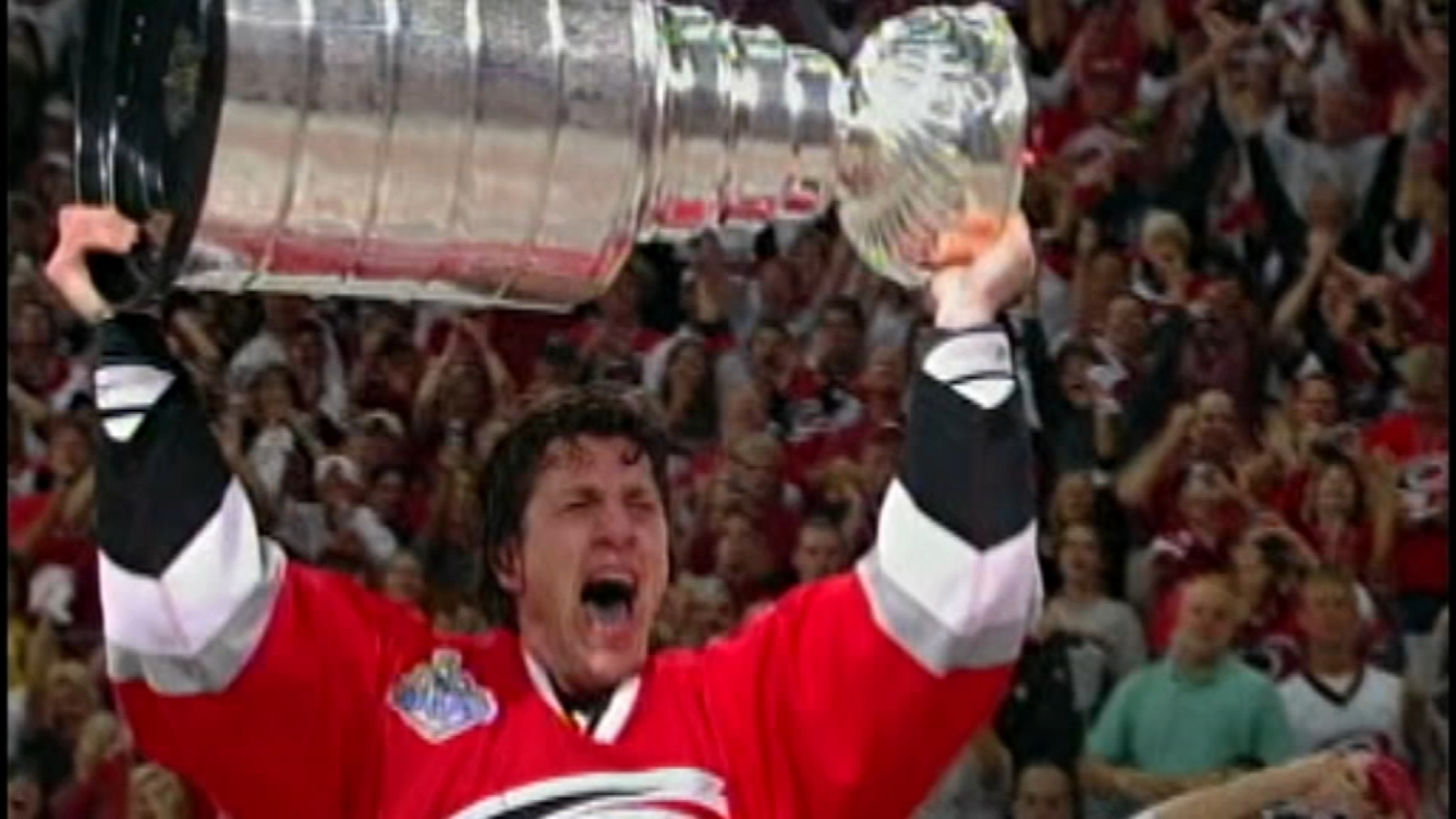 RALEIGH, N.C. (WTVD) — Rod Brind’Amour had a vague notion about North Carolina growing up, “I watched the NC State win, Jim Valvano, I think I was 11 or 12 or something. I remember watching that and then everyone on my street playing basketball was trying to be Michael Jordan.”

Brind’Amour certainly never envisioned living in North Carolina though, especially once his NHL career had landed him in Philadelphia. He was a Flyer through and through, bleeding orange and black. That would all change on Jan. 23, 2000, when he was traded to the Carolina Hurricanes for disgruntled forward Keith Primeau.

As fate would have it, he arrived in the midst of an epic multi-day snowstorm. Brind’Amour had only the suit on his back, a rental car and a hotel room. For seven days he was holed up in the Embassy Suites wondering about the new state of his life and career.

“I remember it, like I said, that was not a good time for me, that beginning”, he recently recalled.

Ever the professional, Brind’Amour got to work and put a good face on things. At his introductory media scrum, he smiled, “Hopefully I can just help a little bit, contribute whatever way and maybe put them over the hump a little bit and get them back into the playoff picture.”

It wasn’t an immediate hit. Brind’Amour’s first goal didn’t arrive until 3 weeks after the trade and he wound up only scoring 14-points in 33 games that first season in Carolina. But his career and the team’s fortunes would blossom from there. There was the initial run to the Stanley Cup Final in 2002 and then, in 2006, his first year as captain, Brindy led the Hurricanes to the Stanley Cup title. It was a personal and professional moment that could never be topped.

In the locker room afterward, he was effusive “I can’t put it into words, these guys deserve it so much. You know what, I’m so happy for everybody man.”

Outside of a 2009 run to the conference final, lean years would follow. In early 2010, Brind’Amour handed the team captaincy over to Eric Staal. Months later, June 30, 2010, he retired. His jersey was soon retired by the franchise. Rod immediately began working in a variety of capacities with the team. Eventually, though, the time arrived for him to take the reins of a young promising roster. The team and fanbase were starving for a return to the playoffs.

“It’s the closest thing to playing. You’re not on the ice… sometimes I wish I could still get out there, but you’re in the fight.”

Brind’Amour would deliver again. Not only did the Hurricanes make the playoffs in his first season as head coach, they advanced all the way to the conference final.

It’s a story that’s not yet finished being told, but 20 years in, after a miserable start, Rod Brind’Amour is now an indelible part of the Raleigh fabric and a North Carolina Sports Hall of Famer. Way back in 2000, when he was squinting and scraping a snowy rental car windshield, it’s a future he never could’ve imagined.

“In that moment I never would’ve said I’ll be here that long, these 20 years and make it my home. I’m pretty lucky.”