Swells of 5 to 8 feet are possible, along with tropical storm force winds. 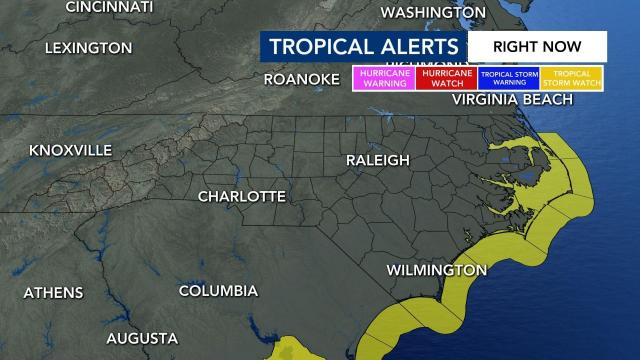 Elsa gained enough strength over the open water of the Gulf of Mexico to become a Category 1 Hurricane, according to the 8 p.m. update from the National Hurricane Center.

The latest update showed the storm had maximum sustained winds of 75 mph.

The latest update from NHC said tropical storm conditions were occurring over parts of the Florida Keys Tuesday afternoon, and would spread north along the west coast of Florida trough Wednesday morning.

By Thursday morning, rain from Elsa arrives in the southern counties of central North Carolina, including Scotland and Richmond. The storm track brings it across North Carolina just southeast of Raleigh as a tropical depression before an eastward turn takes it back out over the Atlantic Ocean.

Heavy rain will be widespread across central and eastern North Carolina through the late afternoon, with the chance for lighter showers continuing until about 8 p.m.

A Level 1 threat for severe weather is in place for the coastal plain for Thursday. Parts of North Carolina could see up to three to four inches of rain.

“The track of Elsa is farther west now, with the center of the tropical depression moving over us on Thursday,” said WRAL meteorologist Mike Maze. “On this track we have a greater risk for isolated tornadoes and rainfall.”

Gov. Roy Cooper activated the state Emergency Operations Center. Although emergency officials aren’t expecting real serious impacts from Elsa, but it’s a good opportunity to get prepared for what could be a long hurricane season.

This is very early in the hurricane season. It doesn’t peak until about September for North Carolina, so we are already telling people, be prepared now,” said Barry Porter with the Red Cross of Eastern North Carolina.